Water restrictions and issues of water re-use are becoming increasingly important to most Australians. As our summers appear to be getting longer and drier, and the grass turns a deeper shade of brown, we are all looking to find new and different ways to be smarter with our water usage.

More specifically, the topic of wastewater has received considerable attention with a lot of time and technology committed to treatment process that can chemically or physically disinfect the water body. However, for those who live outside traditional metropolitan sewage networks and rely on smaller aerated treatment plants, this final stage of disinfection has always had its complications and costs. Final redistribution methods such as surface spray irrigation, release effluent to the surface; this in turn is open to environmental conditions such as wind drift and runoff.

Most councils are now well aware of the benefits of subsurface irrigation, being that there is no contact with treated effluent for humans, animals etc. This in turn has become the preferred method of disposal for most local governing authorities. With little chance of litigation due to someone becoming ill from contact with treated effluent via subsurface, the councils see subsurface irrigation as the way of the future.

By moving the disposal underground, post disinfection, a subsurface irrigation system will deal with secondary treated effluent, dispersing it evenly under the surface. As it is being delivered to the most biologically active layer of the soil, the soil its self will consume any residual bacteria or organic matter, vegetation such as grass will absorb the nutrients. Grass needs to be kept short and well maintained, to allow good air flow and sunlight to take up the moisture. Irrigation area’s of greater than 250 - 300 lineal metres of subsurface drip line, are generally split into equal size zones. These zones inturn are controlled automatically via a water indexing valve, these valves distribute the treated effluent to a different zone each time the pump turns on. 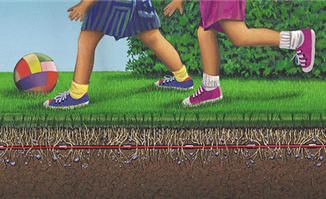 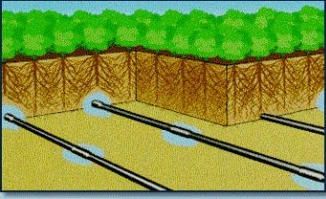 The effluent is distributed through a grid of polyethylene drip line buried 100 – 150mm below ground, with lateral lines spaced at between 0.6 - 1.0m apart, depending on soil quality. The water source is connected to the irrigation lines and pumped through a mesh filter into the drip lines, where pre-inserted emitters can disperse it evenly through the network. This steady diffusion of the water means that there should be no run-off or ponding that could result in direct human contact or contamination of water ways.

The soil type and site conditions, land application size, will all be taken into consideration when sizing a wastewater disposal field. In the past when choosing a wastewater treatment system, the irrigation area was almost forgotten, "just put a hose on the system with a couple of sprays, she’ll be right". Now these days the irrigation disposal area is treated as important if not more important then the treatment system, due to public health issues.

With the entire system buried underground, the possibility of physical damage from lawn mowers, children or animals is greatly reduced. The system can be tailored for small, odd-shaped blocks right up to large fields. And with the wastewater expended under the drip irrigation occurring underground there is no restriction in watering times, even if the surface is being used. 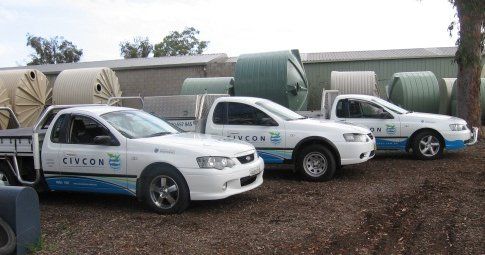